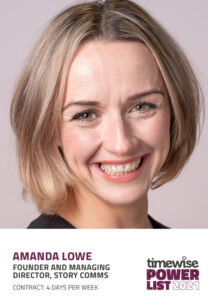 Story founder and MD Amanda Lowe has been named among the 2021 Timewise Power List’s 25 most successful senior-level executives in the UK.

Lowe, the only leader from the Midlands named, is among a stellar line up who achieve everything they do while working part-time.

The Timewise Power List is compiled annually by Timewise, a social consultancy, aiming to create a fairer flexible workplace for all, following a nationwide search. Its previous ‘Power Part timers’ include leaders from The Bank of England, The London Stock Exchange, Channel 4, Bupa and Lloyds Bank.

“I’m a fan of judging impact on outcomes. It’s not about the hours you work, but the success you achieve with the time you have. Productivity and presenteeism should never be confused.

“In PR, like many sectors, there is a huge brain drain of female talent as women start families and struggle to find roles that fit their new priorities. Invariably, this means most senior leaders have historically been male. This is changing – and by celebrating and normalising part-time and flexible working, we let women – and everyone – know that they can ‘stay’, progress and build hugely productive and successful careers on part time or flexible hours.”

The Timewise Power List challenges the belief part-time work is at odds with being ambitious, highly successful, or senior. The initiative also aims to inspire employers across the country with high-flying examples of how flexible working can and should work – by providing trailblazing role models.

Co-founders Karen Mattison MBE and Emma Stewart MBE publish a fresh list annually, and have done since 2012, in order to ‘change the conversation to what’s possible’ when you work part -time.

Selected as one of just 25 leaders across the UK for the Timewise Power List following a nationwide search, Lowe runs her PR firm Story on four days a week, supported by a team of full and part time staff.

Story is currently the CIPR and PRCA Midlands Small Consultancy of the Year and last year was shortlisted as PRWeek’s Best Agency Outside of London. The agency’s client roster includes Highways England, John Lewis, Avison Young, Berkeley Homes and the British Business Bank.

Lowe was last year named by private equity firm LDC as ‘One to Watch’ in its listing of 50 of the UK’s most ambitious leaders.

“In six years, while working a four-day week and growing my family, I’ve built a team that has turned over £2million and won 16 industry awards. It’s a business that has flexible and part-time working in its DNA – 40% of the Story team have worked, or currently work, part time.

“We have to start creating workplaces that work for people. Not just because it’s the decent thing to do, but because the businesses that do, will reap the benefits. We’ll attract and retain the best talent and therefore win the best clients. Businesses that don’t – they’ll get what’s left.”

‘Busy and invigorating’ – My first few weeks at Story