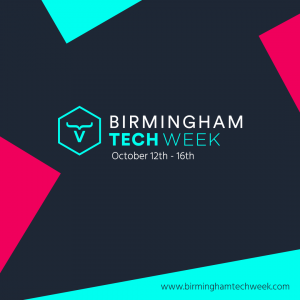 Birmingham Tech Week is the largest regional technology festival in the UK, with more than 5,000 attending last year. This year’s event is virtual and free to attend.

“This year’s Birmingham Tech Week comes as we look to a future where geographical boundaries matter less than ever. As an agency that champions the regions, we couldn’t not go to bat for our tech colleagues.

“Birmingham and the wider region has been growing its tech credentials solidly over the past few years, building the talent pool and career building network of businesses needed to create a sustainable local scene. Now, Birmingham is deservedly rising up the ranks as a global city for tech. From Advanced to Capgemini, major investors and start-ups alike realise what can be achieved by locating here.

“We’re looking forward to shouting loud for Birmingham’s tech community as partners for Birmingham Tech Week, which plays a vital role in shining a spotlight on the area and its tech potential.”

“The aim of Birmingham Tech Week has always been to put the West Midlands’ tech scene on the national stage. To achieve this, we need a comms agency that fully understands what can be a complex sector, has roots in the region and national reach. Story Comms fits the bill perfectly.

“Partnering with Story was an obvious choice for us – with several of its clients participating over the years, we already work together closely. Taking the next step and establishing a formal working relationship is something we’re extremely excited about – and look forward to building on this well into the future.”

The week will give attendees unparalleled access to industry experts and thought leaders on a diverse range of topics including starting and scaling a tech business, customer experience and business culture.

Those wishing to get in on the action can do so by registering here: https://2020.birminghamtechweek.com/

Bouncing back? Don’t believe the hype…

Unprecedented. A time like no other. Now, more than ever. The new normal…